A sword in the stone, a lance emerging from the water

We know that the combination of a car wash lance and the sword in the stone is quite daring. The Catalogue of Solutions’ cover recalling the Italian myth of the sword in the rock seemed to us very impressive and indicative of the path followed by the company in its 30 years of activity. First of all the ancient roots.

It is true that the legend of Galgano Guidotti* has been living for almost a thousand years and that Idrobase Group is undoubtedly younger. However, nowadays it is a great result for an Italian company to achieve a 30-years activity goal. We chose an Italian myth because the Made in Italy is our reason to promote worldwide the solutions that we create, design and build in our headquarter in Borgoricco, halfway between Venice and Padua, one of the most charming places of Italy.

We recognize in the image of the sword in the stone the firmness of the values, which have always inspired us. For this reason, we show a lance emerging from the water, as the other side of an ideal coin that brings together two Italian myths.

*Galgano Guidotti was born in 1148 in Chiusdino, a village in the Province of Siena. After a youth as soldier, he chose to become a hermit after the vision of an angel. He no longer had to use his sword, so he decided to plant it in a stone on a hill. Around the sword in the rock, there are now the ruins of the San Galgano abbey. The magical aura of the famous sword is the protagonist of several myths: the image of the sword that magically emerges from the water is one of the cornerstones of the collective imagination. 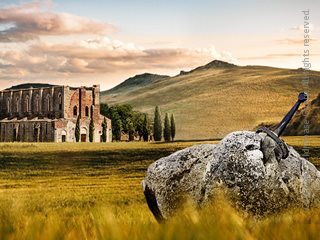