“One customer, one market”: from the new Catalogue of Solutions backstage cover

We have seen the new Catalogue of Solutions cover as an opportunity to show, using a video, the work behind the final shot. We must admit it! For the idea of the cover image, we took inspiration from the sword in the stone, the mythical sword of King Arthur.

In our case, we used a car wash lance emerging from the waters thanks to gentle hands. The lance is shrouded in a cloud of sprayed water. The two souls of high pressure water, according to the two Idrobase Group core business are merged in a single image: linking misting and car wash. An image recalling the myth of the sword in the rock that has its roots not only in mythology, but also in San Galgano cult.

In a little over a minute, the video presents images ranging from the concept design to the real work, often undervalued, to realize the material in order to create the ideal atmosphere to get the desired photo shot.

One customer, one market is Idrotech traditional slogan: now it is reflected in this activity. It looks as if Idrobase Group had commissioned the cover project to itself with a very special attention. 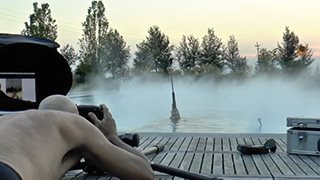