Thanks to the important commercial exchange with China, Idrobase Group recieved the award of “Creatori di valore” at the fifteenth edition of “China Awards”: the ceremony dedicated to Italian and Chinese companies, organizations and personalities that better seized the trade opportunities between the two countries.

Idrobase Group boasts an open dialogue with China for sixteen years, thanks to the manufacture and exportation on Chinese soil. And in the crucial moment of the pandemic as well, the company has been able to cope immediately with the circumstance, exporting anti-virus solution to the Eastern Country. During the official awards ceremony, which took place under the patronage of Italian Ministry of Economic Development and with the presence of the Ambassadors of the two Countries, has been emphasized the role played by Idrobase Group who provided the “Most effective solution of virus sanitization”.

The company's commitment to the eastern country has been highlighted in the speech of Idrobase Groups’s co-founder, Bruno Ferrarese. Indeed, China it is definitely an outlet for the Made in Italy technology export: anti-virus and anti-bacterias solutions, as well as fogmakers able to suppress particulate matter (PM10 and PM2.5). In China there’s also Idrobase Group’s  Ningbo factory headquarter, which manufacture products for the cleaning and car-washing sectors distributed in the large China, South-East Asia and United States markets.

Italy was the first G7 country which have signed the New Silk Road memorandum. Idrobase Group, in full agreement with these shared growth mindset, keep relevant future targets related to this Eastern Country: the company is increasing his presence in order to become the leading player in the car-wash field, with plans for a further expansion with the creation of a new company dedicated to vehicle detergents production.The presence of Idrobase Group in China, driven by a partnership mindset and aimed at a common growth of both nations, can be properly described by the “give-and-take” formula. 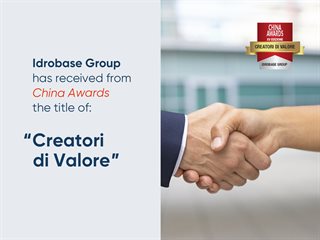